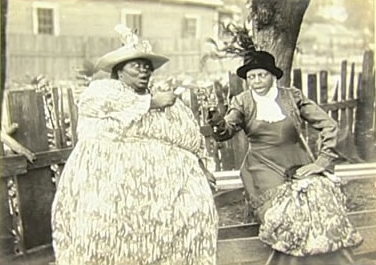 Shot in Jacksonville in 1919, The Love Bug is a slapstick comedy centering on two romantic rivals. Twice-widowed Mrs. Margerine Scrubb (played by Maud Johnson) and the never-married Miss Cuspidora Lee (Maud Frisbie) are charmed, armed and prepared to fight for the affections of bachelor Quintus Weefalls (Robert Stewart).

The film was promoted as featuring a 425-pound woman (Johnson) and a set of triplets. The highly entertaining short actually was borne of a project that proved a dismal failure. Silent filmmaker Richard Norman had produced a series of successful local films called The Wrecker, featuring white casts culled from various towns where Norman traveled, primarily throughout the Midwest and Florida. Inspired by the emergence of race films, Norman revamped the dramatic script, adding comedic elements, hiring an all-African American cast and renaming it The Green Eyed Monster.

But audiences were none too impressed with the comedic additions. So, Norman cut the scenes and re-released The Green Eyed Monster as a black-cast drama. While that final version proved a success, Norman still believed in the potential appeal of the comedic scenes. So, he edited them into a stand-alone short story, often showing it as an add-on at screenings of The Green Eyed Monster. This combination proved a crowd-pleaser and, luckily for today’s audiences, one short clip of The Love Bug survives.