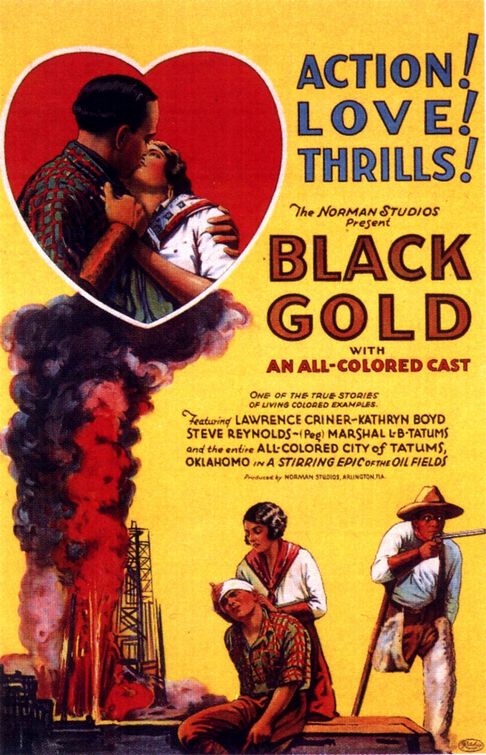 Richard Norman’s Black Gold, starred Laurence Criner and Kathryn Boyd, the same two leads who had helped make The Flying Ace such a success two years before. This time, however, the cast and crew left Jacksonville, Florida for Tatums, Oklahoma, a tiny town that literally covers just two square miles.

Founded in 1895, Tatums boasted a hotel, blacksmith shop, cotton gin and motor garage by 1918. Then, in the early 1920s, oil wells were drilled, bringing near instant wealth to several of Tatum’s farmers and landowners. So, it was the perfect locale for Norman’s “stirring epic of the oil fields.”

In the film’s plot, oil has been discovered on the range-land near Tatums, and all ranching has been abandoned to the drilling of wildcat oil-wells. Mart Ashton, owner of the Circle Bar Ranch, has also caught “black gold fever” to the extent of using all his cash and selling his large herd of cattle to finance the cost of a drilling-rig and crew.

On an adjoining tract, the Ohio Company brings in a well and Ashton is put in the position of drilling an off-set well within thirty days or losing all rights to drill on his own land. But, Ashton has run out of money and his driller, Pete Barkley, is scheming with Walter Wonder, cashier of the Ranchman’s National Bank, to delay the drilling. He borrows the needed money from the bank, but Wonder accuses him of stealing it, and the U.S. Marshal jails him. His ranch foreman, Ace Brand, knows he is innocent but is unable to prove it. With no crew and only seven days left to bring in the well, it is up to Ace, Peg Reynolds, a one-legged cowboy, and Alice Anderson, Ace’s sweetheart, to bring in the well.

Norman wrote of the film’s hero:

“Through superhuman effort, and without sleep for 48 hours, he fights a band of crooks… only to discover it is a dry hole. [He] winds up in jail. All this makes for an absorbing tory of action and thrills with a great surprise at the end when everything is cleared up.”

In addition to the professional leads, Norman drew upon the Tatums community for talent. Among the locally-cast characters was actual U.S. Marshall L.B. Tatums. Casting townsfolk was just one of the efforts Norman made to assure a realistic picture. In promoting Black Gold, he wrote:

“The story can’t be beat for thrills. It’s real and staged among the proper atmosphere. Through proper connections, I was able to secure the whole-hearted co-operation of the Standard Oil Company, who were drilling several oil wells on the Tatum’s property which were best to film, and through their assistance, Black Gold is authentic from every drilling detail, and aside from its thrills, is a true portrayal of the Romance of Oil towards which no oil man can point a finger of criticism.”

Unfortunately, Black Gold would be Norman’s last feature film. In the race to develop talkies, Norman had sunk an enormous amount of money into the invention of a device that would sync sound with moving pictures. By the time he had sold nearly a dozen units, news of a commercially viable sound-on-film system hit. A financially wearied Norman ceased production of feature films, turning instead to making corporate training and promotional films and distributing films, including a series of Joe Louis fight films.