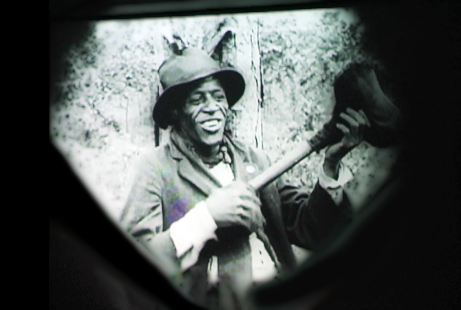 Dubbed the “One-Legged Wonder,” Steve “Peg” Reynolds was a longtime friend of silent filmmaker Richard Norman. Despite having missing most of one leg, Reynolds was an amazing stuntman who appeared in every one of Norman’s race films and performed the craziest of stunts, including hopping moving trains, climbing on to rooftops and chasing a villain’s speeding car down a dirt road riding a bicycle while shooting at the car with a rifle hidden in his trusty crutch.

Here’s how Norman described Reynolds in press materials for The Flying Ace:

“PEG, of Green-Eyed Monster, Crimson Skull and Regeneration fame, is well known to the thousands of theatre patrons who have seen the Norman Films. He is the one-legged wonder who does stunts that no two legged man can do. In The Flying Ace, he rides a bicycle and shoots through his hollow crutch, bringing grief to a gang of crooks. He again pulls off a barrel of laughs and thrills.”

“The hero doesn’t do all the fighting – he just pulls off three different ones – but did you ever see a one-legged man fight?… [Reynolds also] “does a marvelous feat of skill on the precipitous 100-foot-long roof of the derrick house on one leg that I can confidently say has never been done by a one-legged man before.”

Never mind that Reynolds, whom Norman affectionately called “Ole Reliable” injured himself in that very jump and was under a doctor’s care for the next two weeks.

It’s unclear how Reynolds, born in Waycross, Georgia on July 7 of 1892, lost his leg, though it’s creatively explained in The Flying Ace. His character is a former military serviceman who lost his limb in battle. All that’s known is that his 1917 World War I draft registration card, completed when he was 24 years old, shows that the leg already was gone.

Census records show that Reynolds worked as a self-employed advertiser. Such definitely was the case with Norman’s films. Reynolds often accompanied Norman on trips to help “ballyhoo” or promote films screening in various parts of the country. Reynolds would perform 15-minute Vaudeville skits before the film screened, and invariably boosted business in each town. 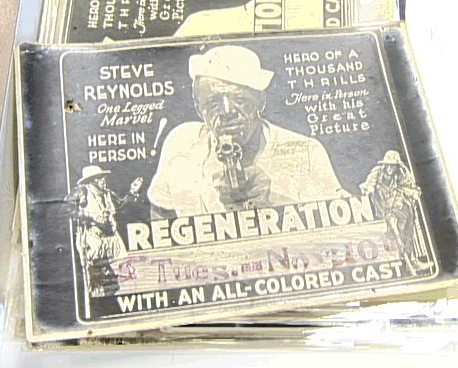