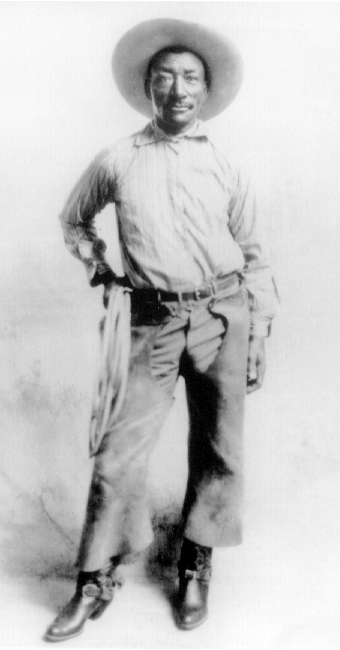 Born in Taylor, TX, Pickett was of African, white and Cherokee descent. He attended school through the fifth grade, leaving to take up ranching work to help support his family. According to one account, a teenage Pickett watched several white cowboys having a tough time holding a calf still for branding. He told them he could catch and hold a calf by himself. Laughs were had and a challenge was made. Pickett answered by catching a roped calf’s upper lip with his teeth, just as he’d watched bulldogs doing. The calf didn’t bawl or move while Pickett held him for the branding.

Until then, the term “bull-dogging” referred to using dogs to chase cattle out of the brush. Teams of two dogs were trained to work together. One, called a heel-dog, nipped at the cow’s heels while the other caught and held her by the lip until a cowboy could tie her.

Pickett showing off his skill that first day proved fateful. It spawned one of just a handful of rodeo events that can be attributed to one person. And it changed entertainment forever. Pickett soon added a bit of drama to his stunt by riding hard and springing from his horse before wrestling the steer to the ground. Word spread and Pickett began performing at local country fairs. With his four brothers, he established The Pickett Brothers Bronco Busters and Rough Riders Association, traveling and performing throughout Texas, Arizona, Wyoming and Oklahoma.

In 1905 he joined the Miller Brothers 101 Ranch and Wild West Shows, performing nationwide and throughout Canada, South America, and even Great Britain. In 1921, silent filmmaker Richard Norman caught one of Pickett’s performances and, as they say in the business, “a star was born.” Norman cast Pickett in two films, The Bull Dogger and The Crimson Skull. With that, Pickett made history as the first black cowboy film star. Pickett later would be recognized as the greatest cowboy of his day. He died in 1932 after being kicked in the head by a horse and is buried near a stone monument to Ponca Tribal Chief White Eagle, a testament to his friendship with the tribe. He left a legacy that inspires entertainers, rodeo competitors and stunt performers to this day. The Norman Studios currently is in pre-production and raising funds for a full-length documentary on the life and career of Bill Pickett.