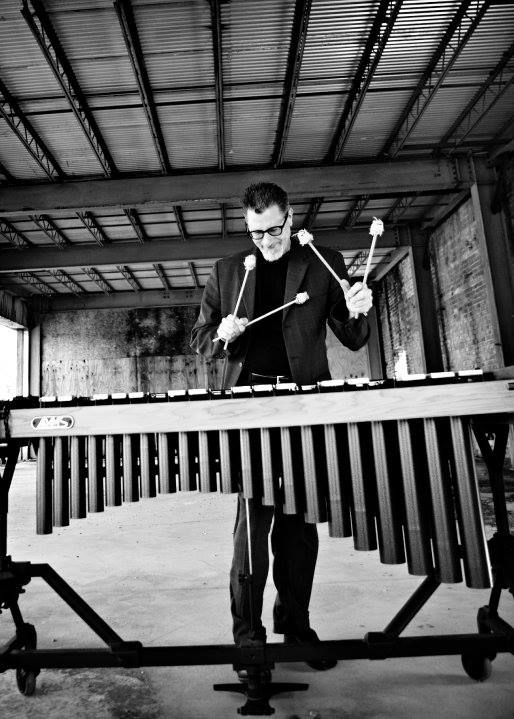 If you’ve ever watched a film that stayed with you long after it ended, music played a part. Silent film uses music to represent the dialogue, set the mood and advance the plot. The musicians who choose to keep this art form alive are a special breed.

“We’re a boat on the rapids. The film is the rapids and we have to react to everything – and somehow not fall out of the boat.”

Steve has been a Percussion professor at Jacksonville University (JU) for 17 years and has owned Tony Steve Music for 37 years. Steve scores and plays live music for Norman Studios’ Silent Sunday screenings along with Sarah Lee on Saxophone, Jonah Pierre on Piano, Evan Peterson on Drums/Percussion and Cody Wheaton on Acoustic Bass.

The band began their formal relationship with Norman Studios in July of 2014. Norman Studios spoke to Steve in his office at JU on February 10, 2015 about his thoughts on scoring films and the importance of music.

What’s been your favorite film to score?

“Hard call. I really enjoyed “A Florida Enchantment.” The first one in July was a lot of fun because we were able to do it in an old jazz style. Everybody in the group comes from different backgrounds; They’ve all been students of mine at one point. I try to keep music that doesn’t go in front of the ear of the film. I read once about a pianist playing along, and a scene comes up where someone is dying, and they start playing a rag. They didn’t look up at the screen; they were just turning pages. And that’s what you can’t do.”

How long do you have to practice to score the silent films?

“I start scoring as soon as we figure out what film [we’ll score]. Then we rehearse the day of. The beauty of this group is everybody’s a good reader [of music]. They’re highly prepared and highly trained professionals and it’s easy to do what is expected.”

Who is your favorite character from all the silent films you’ve watched? Who do most empathize with?

“It’s a toss-up, depending upon what they’re doing, between Buster Keaton and Fatty Arbuckle. But I love it when they work together because they know how to play off of each other. If I had to choose one, it’d probably be Buster Keaton – his skill as a director, and his skill a physical actor. He didn’t have a stuntman and he did a lot of writing. You know, he was Carol Burnett’s mentor. She spent a lot of time with him when she first got to Hollywood. He taught her about physical comedy, so she learned from the master.”

Do you ever make mistakes when you’re actually performing?

“Never.” (Laughs)
“When there’s a mistake, you keep going. You just keep driving the bus. And the mistakes usually aren’t notes. Sometimes, a piece of action on the screen will get missed.”

What was the first instrument you picked up and learned?

“My Mother put me in piano lessons when I was a kid, and I was an average to terrible student; I wouldn’t do what I was told. I’d spent a lot of time improvising. Then I started playing drums for the school band and started composing. I composed all through college and grad school.”

Who were your mentors?

“David Raksin, the fellow that wrote an academy award-winning song for the movie ‘Laura.’ He was a very important film composer in Hollywood and also a very nice man.

“A lot of the xylophone soloists, the ones that were alive from the era, Harry Breuer and Sammy Herman were also very helpful. Red Norvo. People like that. They were all alive in the late ’80s, so I got to talk to them and interview them on the phone. One of the things about percussionists is that we’re very helpful to each other. There aren’t too many secrets.”

Who are your musical influences?

“Frank Zappa is a huge influence … ‘In A Florida Enchantment,’ there’s a scene where the woman, who has eaten a seed and started transgendering. She’s smacking and slapping her servant around. At that point, I thought, it’s time to play ‘Ain’t She Sweet’ [by the Beatles]. Things like that are funny to us [the band], and I’m sure that’s Zappa-influenced. A little sarcasm. A little irony.”

How has modern technology changed things for you?

“It makes it faster to write – and slower – all at once. I can carry everything around on my iPad. I can hand it off easier to somebody on a pad, but I can make changes faster by hand.”

What do you do in your spare time?

“I read. I’d like to run again, but I read – a lot of American and World history. I’m interested in doing some instrument design in the future and some educational things, but primarily my hobbies are reading and spending a lot of time with my animals. The dogs are old. It’s like they’re in assisted living.”

“We moved out to Orange Park last year. There’s a pizza – with bleu cheese stuffed olives – named after me at Vino Java Brew House. I can pretty much die and be happy.”